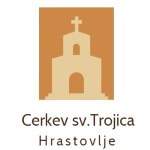 Holy Trinity Church, Hrastovlje is a historical building in Hrastovlje, a village in southwestern Slovenia. There are two hypotheses about its origin. According to the first, it is a Romanesque church from the 12th century. According to the second, it is an example of the Istrian variant of Early Venetian Renaissance architecture from the 15th century. The church stands behind a wall that the local population built to protect itself from Turkish attacks in the 16th century. Such defensive architectures are found throughout the territory settled by Slovenians and are called tabor.

Holy Trinity Church, Hrastovlje and wall were built on bare rock, and for this reason do not have deep foundations. The church is built mostly out of stone, as is typical for the entire coastal region. The stones were never entirely covered in an outer layer of plaster, and it is thus possible to see how the church was built. One can see that top of the church spire was rebuilt at some time, although it is not known why. The church is topped with tiles made of thick plates. These are characteristic for older roofs in the Mediterranean region.

The church has only 2 windows (a third window was walled up in the past) as a result of the local weather conditions. In summer, a room with a small window was protected from the sun, while in winter it was protected from the bora. Because of the low number of windows, the inside of the church is however very dark. In 1896, a hole was knocked in the northern wall to create a new window, but unfortunately some of the frescoes in the church were destroyed at the same time.

Despite the lack of windows, the church nonetheless used to be better lit than it is today. This is the result of the addition of the powerful outer wall, which robs the church of much of its light.

The church is 11.7 metres long and 6.05 metres wide and thereby one of the smallest churches in the area. It is not even as large as the average village church. Some claim that the church is an example of Istrian Renaissance architecture from the second half of the 15th century.

The appearance of the northwestern entrance to the church, as known today, dates back to around 1776. The original entrance was probably next to the bell-tower. 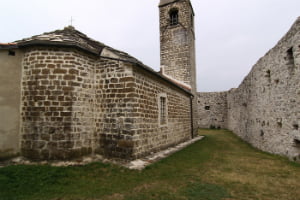 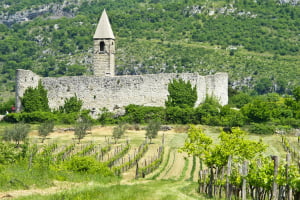 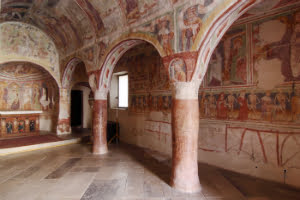 The Holy Trinity Church, Hrastovlje has been painted with Gothic frescoes by Johannes de Castua, who finished his work on 13 July 1490. Some of them include letters in the Glagolitic script. The most famous of these frescoes is a Dance of Death or “Danse Macabre”. They were discovered in 1949 under thick layers of plaster by the academic sculptor Jože Pohlen (sl).

This website uses cookies to improve your experience while you navigate through the website. Out of these, the cookies that are categorized as necessary are stored on your browser as they are essential for the working of basic functionalities of the website. We also use third-party cookies that help us analyze and understand how you use this website. These cookies will be stored in your browser only with your consent. You also have the option to opt-out of these cookies. But opting out of some of these cookies may affect your browsing experience.
SAVE & ACCEPT
Powered by